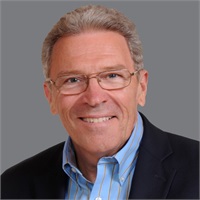 Conrad and his wife, Jane, moved to Melbourne in 1981 where they raised 3 sons. His professional career has been primarily devoted to financial education where he has served the needs of families and businesses in Brevard County for over 30 years. He also served as past president for the Brevard County Association of Insurance & Financial Advisors and with the Brevard County Estate Planning Council. Conrad has many notable achievements including the designation of CLU (Chartered Life Underwriter), CLTC (Certified in Long Term Care) and the esteemed ChFC (Chartered Financial Consultant).

Conrad’s professional career has primarily been devoted to financial education. He considers listening skills a prerequisite in personal and business planning. He helps translate his clients’ dreams and desires into financial plans; Plans to educate, plans to retire, plans to deal with financial risk and income risk. Plans to pass on a business. These plans are based on innovative strategies which are taught, discussed, challenged, agreed upon, implemented, and then periodically reviewed, for ongoing effectiveness.

Conrad and his wife, Jane both hail from Manlius, New York. Jane was educated as an RN at the University of Rochester. Conrad earned his BA degree from Alfred University. After college, Conrad served in The US Marine Corps. Conrad sought additional education at the University of Alaska, and the University of Wurzburg in Germany. The couple wed and moved to Brevard County in 1980. Here, they raised three sons. Conrad was early involved with his boys, both as a coach and a referee in youth soccer and basketball. He also worked as a leader in the local Boy Scout movement. The family was drawn to the area by the beach and the ocean. They’ve all enjoyed water sports, including boating, surfing, swimming, and fishing.